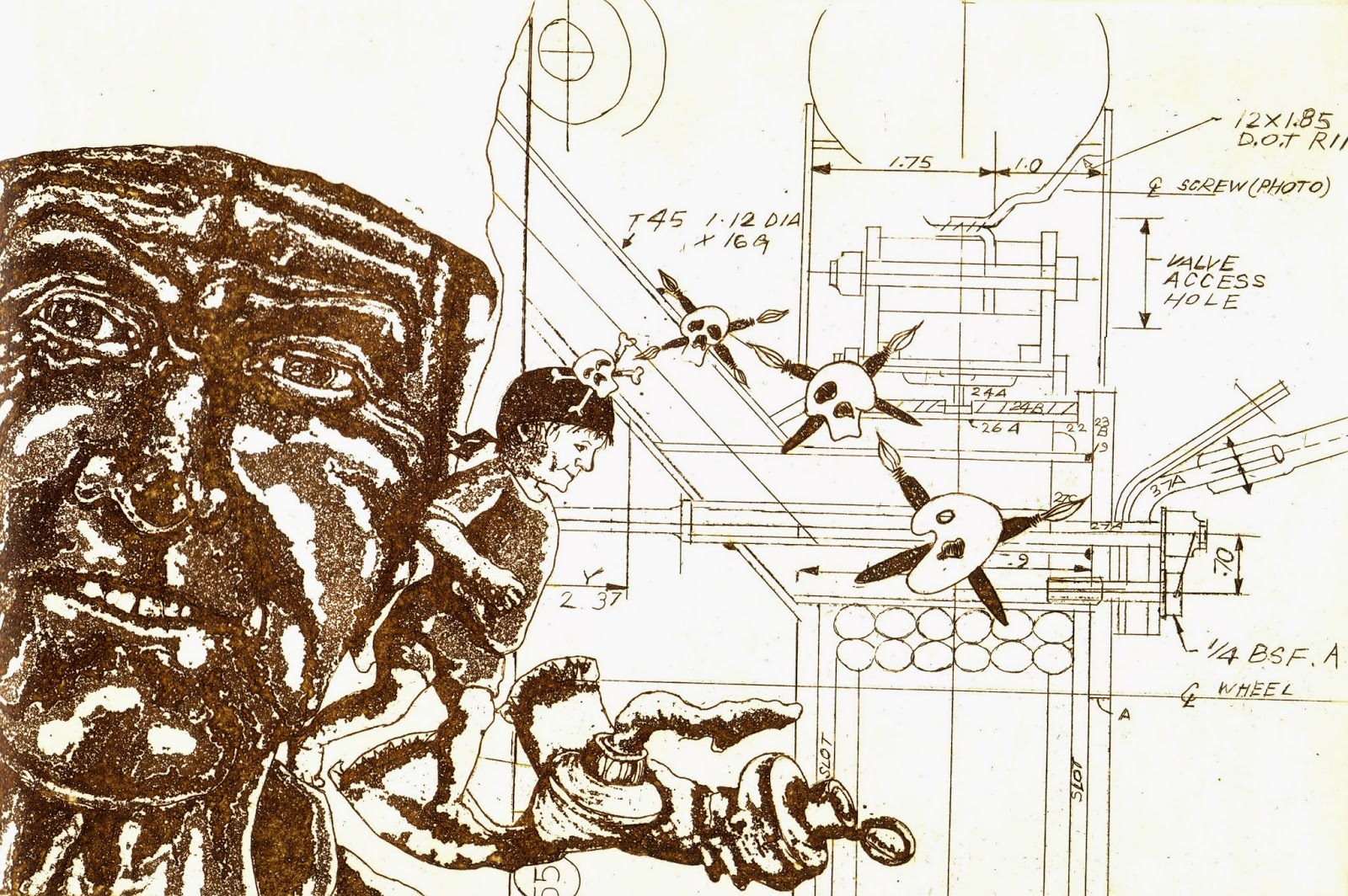 I've just realised that I've not blogged about PB4 lately. This is partly because I've been working on other projects and partly because I'm stuck again. Quite a lot has happened to the image but I can't seem to resolve it at the moment. 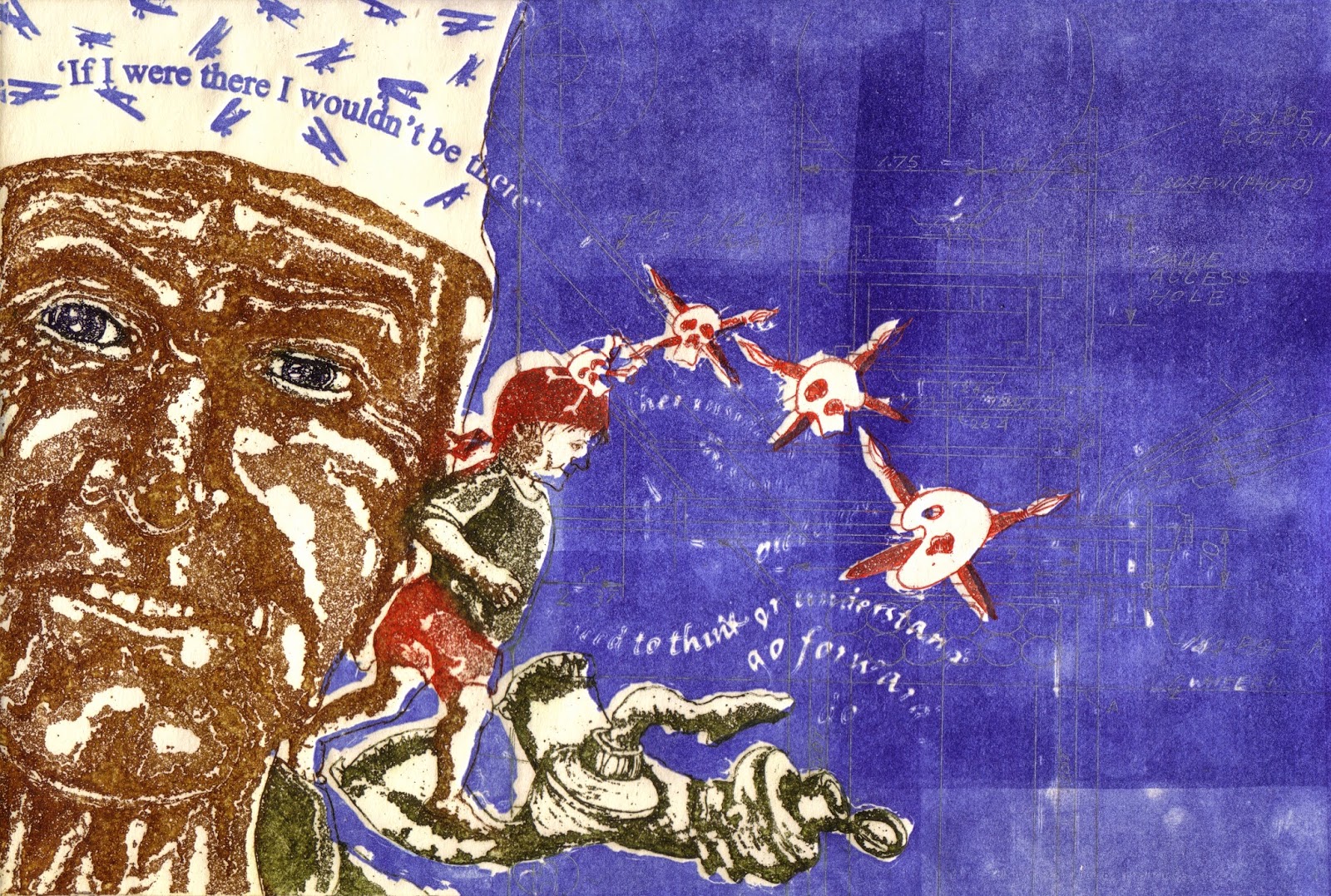 So. Next step, leave the diagramatic elements uninked and roll relief blue over the the etching plate. Better, but I still don't have some of the text from the original drawing. This is where I'm stuck. 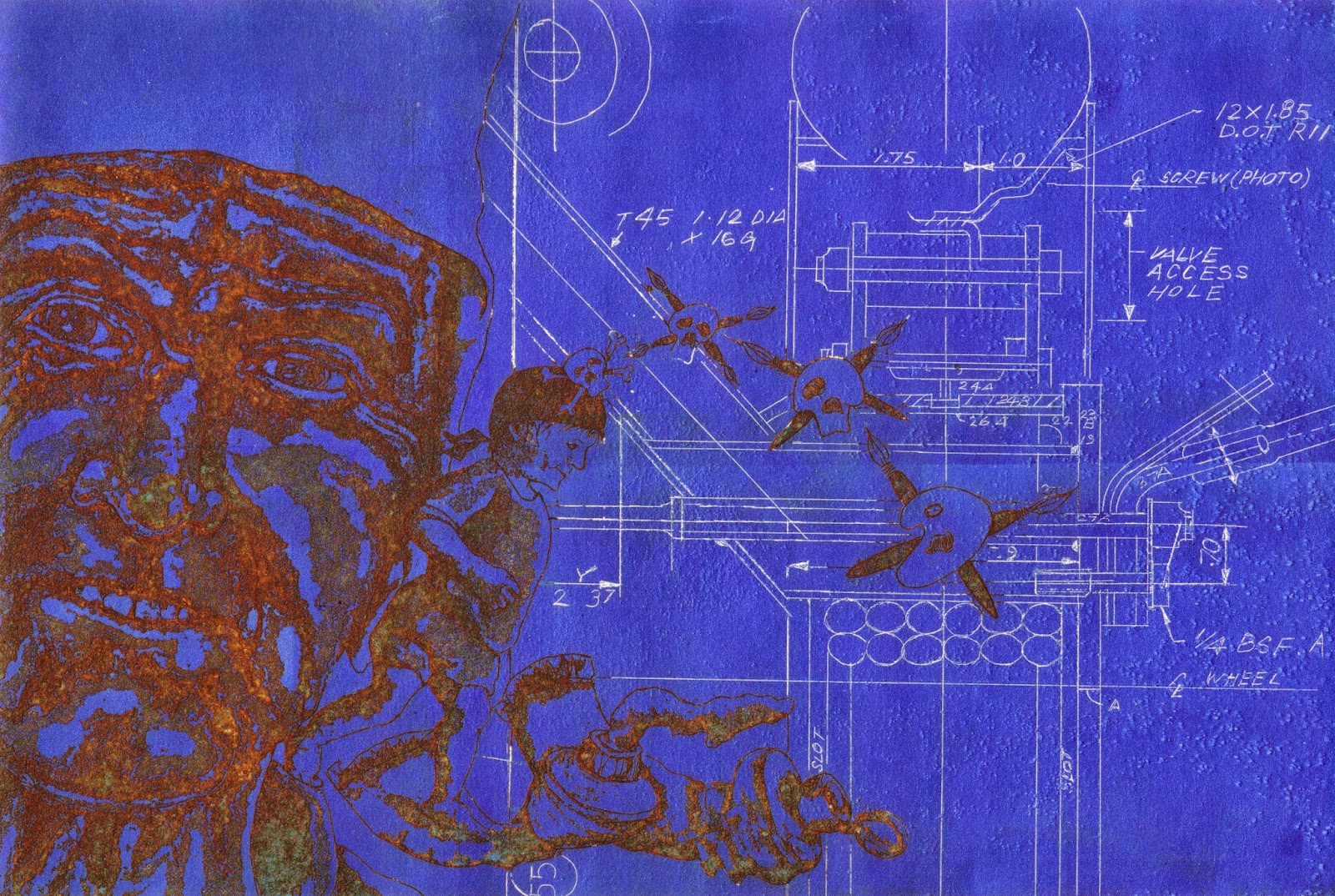 I'm wondering if I can ink up selected areas of the solar plate... This needs time to experiment with, something I don't have an awful lot of right now. 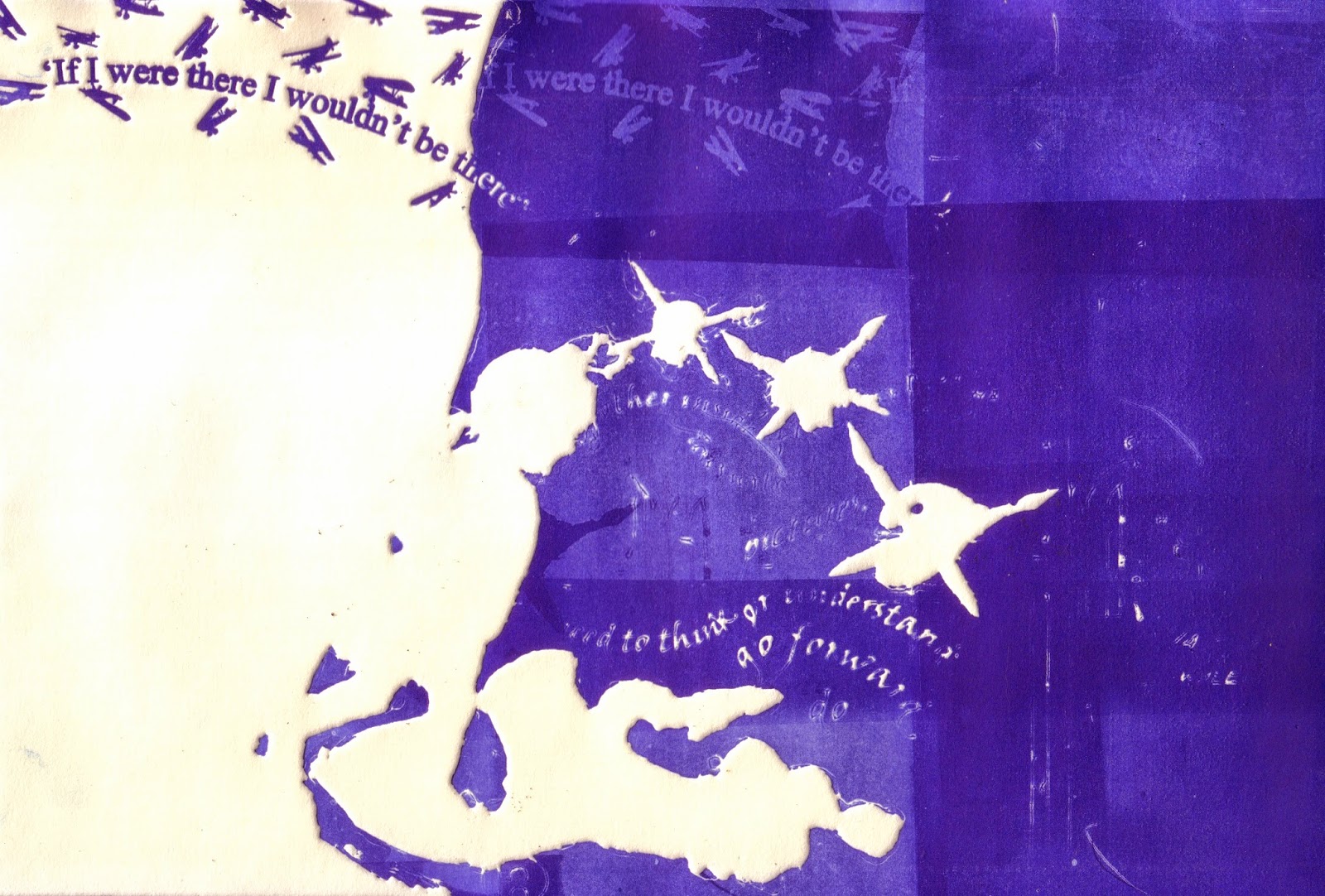 It will happen though. Eventually. 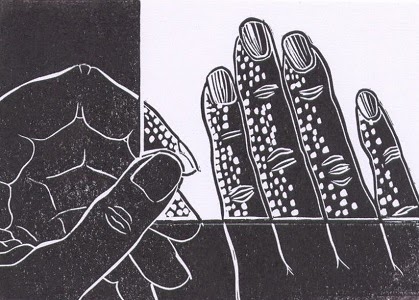 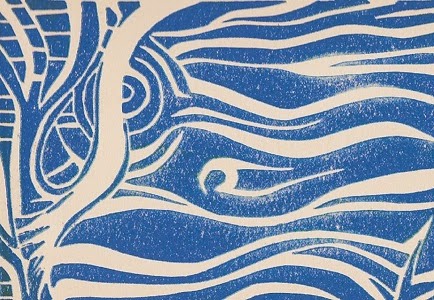 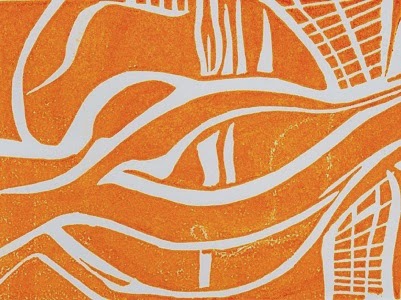 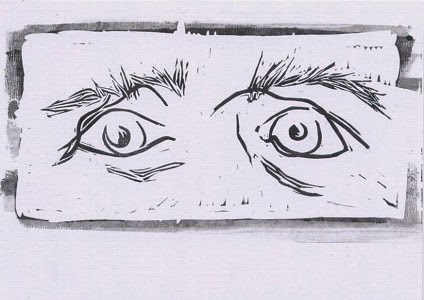 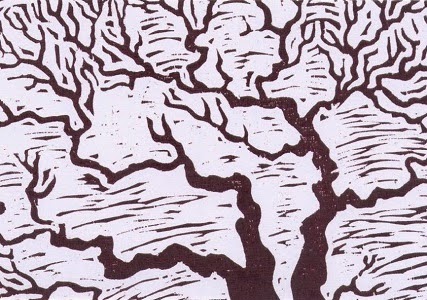 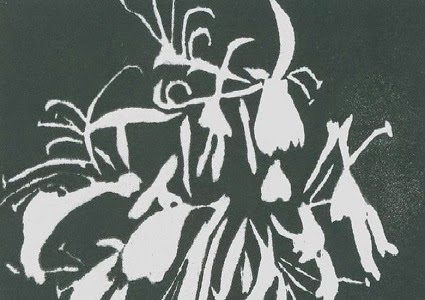 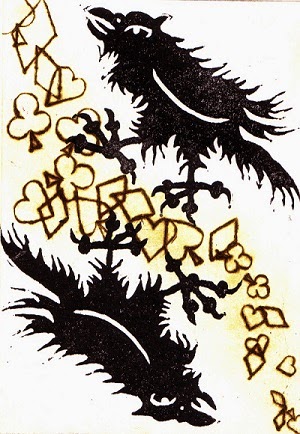 Stanley Spencer: Heaven in a Hell of War


I'm rather ashamed to say that, although it's pretty much on my doorstep, I've not visited Sandham Memorial Chapel to see Stanley Spencer's paintings. Instead I trekked a bit further last week to see some of them at Pallant House Gallery in Chichester.

The exhibition consists of sixteen of the paintings from the chapel (which is currently being renovated) and were painted between 1927 and 1932. The images are Spencer’s interpretation of his memories of war; his time at Beaufort War Hospital in Bristol and in the Medical Corp in Macedonia . I was particularly taken by the set of three paintings pictured here: Frostbite, Bedmaking and Tea in the Hospital Ward.

The colours are rich, the action engaging and the detail fascinating. Of course there is more to them than merely a scene of army hospital life. Spencer imbues the images with symbolism; in Frostbite, the buckets carried by the ward orderly in his white gown transform him into an winged angel; the central figure with outstretched arms in Bedmaking reminds us of the crucifixion; Tea in the Hospital Ward becomes the last supper. It’s the detail and rich pattern that I appreciate most though. The scenes are a riot of patterned wallpapers, fabrics, and carpeting which adds to the busy chaos. These are joyously bustling scenes (which makes me wonder how any of the patients got any rest…), pretty far removed from the horror of the trenches. There is symbolism hiding in the detail too – Spencer's wife Hilda and his father are pictured there. The jigsaw pieces scattered on the table add that little extra detail of daily life on the ward.


﻿
A couple of other thoughts: Spencer was a master of material in a all his paintings, very observant of and proficient in rendering surface and texture of materials. The metal buckets in Frostbite, and the tea urns in Filling Tea Urns shine (I can hear them clanging as they knock together), the wooden shelving in Washing Lockers, the towels in Ablutions – one can almost feel the texture, the temperature, soft, hard, cold, warm.
I don’t know if it was intentional but all Spencer’s characters seem to be lost in their own thoughts, separate from each other. There seems to be very little acknowledgement between them (Ablutions is a good example). They are preoccupied with what they’re doing, perhaps daydreaming about home and loved-ones as they repeat the daily routine, so practised as to need little concentration. I can only try and imagine what it must have been like; I'm sure that like those in the paintings, I would have followed Spencer in focusing on the 'very happy imaginative feelings' found in the insignificant daily round rather than the desolation of WWI.