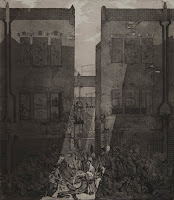 I sloshed my way up to the Bankside Gallery in London on Saturday to have a look at the annual RE show which was as rich and varied as always. It’s a bit of a two-edged sword for me because I find it inspiring and motivating but at the same time, a bit depressing as it reminds me of how little time I get to work on my art.

A print that really caught my eye was Decadensian by Frederick Morris, a newly-elected student member of the Society. This large etching and aquatint appealed to my penchant for atmosphere and narrative. It reminded me of an updated version of Hogarth’s although rather darker and more chaotic if that can be imagined. 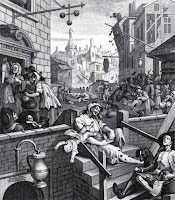 During the duration of the show, several of the participants have given demonstrations of their particular medium; Angie Lewin and Gail Brodholt were giving linocut and wood engraving demos on Saturday. Still to come are demonstrations in linocutting, wood engraving and etching by Roy Willingham, Daphne Casdagli and Kate Dicker. The show ends on Sunday 6 June.

I’ve developed an interest in meditation recently. This had nothing to do with my art making initially; it was in response to the emotional and physical strain of over two years of caring for elderly parents with dementia whilst trying to juggle the day job as a children’s social care data analyst, make art, run a home and have a social life. Throw in the countless other things that have to be dealt with and it leaves my brain feeling a little fried at times, something that a lot of people can sympathise with I’m sure. Life for most people these days is hectic at best.

I’m not sure what lead me to meditation but having read up a bit, there’s a lot of research which seems to suggest it’s a good thing for emotional, mental and physical health. My main aim is to find space to calm my mind and therefore help it to function better in day-to-day life. I’m not by nature a patient person, so this is going to be a test of my discipline and perseverance; there won’t be a miraculous overnight improvement.

I’ve been reading about brain activity in relation to meditation. There are four kinds of brainwaves apparently; alpha, beta, delta and theta. As I understand it, the mind is in a beta brainwave state most of the day when we are awake and active; thinking, talking, dealing with a huge range of stimuli and abstract thoughts about the past and future. These are the fastest brainwaves. Alpha brainwaves are slower; the mind is in this state when relaxed but still alert. We are receptive; not thinking but sensing, feeling and very much in the moment. Meditation induces this brainwave state apparently. Delta and theta brainwaves relate to sleep.

Where does this fit in with art practice? Over the years, I’ve had a number of conversations with people about what’s going through my mind when I’m working on a plate or a drawing. It sounds rather esoteric and a bit tree-hugging but the only way I’ve been able to describe it is as an almost zen-like state where I’m not really thinking about anything, just focusing on the artwork. I don’t think I even really think about what I’m working on; it’s almost as if my hands are working automatically. Thoughts come and go but I’m not really aware of them. As I said above, I’m not a patient person and the thought of starting a new piece of work can be daunting; and yet, when I’m working on a plate, I find I can work on a small area for hours without any kind of fatigue or irritation. It takes as long as it takes. In fact, I find it peaceful and restful. So I’m assuming that my mind must be in an alpha brainwave state and therefore in the same state as it would be during meditation. This is a very good thing and I obviously need to find time (somehow) to do more of it!
Posted by www.joprice.co.uk at 16:37 3 comments:

The Undertaker's Nuptials: the Datamonger

As the clatter of the shop door closing subsided, all rattling glass and jangling bells, a behatted head appeared above the counter.

‘I have some choice samples for you today Mr Spearman.’ Lycoris Moir reached inside her oversized gabardine and pulled out her notebook with a flourish. The pages flapped and a fine shower of what one would imagine was dust fluttered out and tumbled in the air, catching the sunlight. Instinctively Spearman went to reach forward, then checked himself.

‘Nonsense Mr Spearman! Contraband indeed! This is a perfectly legitimate service we perform. If only people knew Mr Spearman, if only people knew. They would thank us. Indeed.’ The datamonger looked doubtful and noticing some coppery specks on the glass counter, snatched a cloth from somewhere behind him and rubbed quickly at the glass. It left a smear. Beneath lay large enamel trays containing numbers; some made of copper, some brass, and of varying sizes, piled up just anyhow.

‘I hear Mr Wheelwright’s had a busy week,’ Spearman stuffed the cloth into the back pocket of his trousers and manoeuvred his bulk around Lycoris and hurried to the door. He pushed across the two bolts and let slip the catch so that the door was locked and turned the open sign around to read CLOSED to any potential customers. He scuttled back round Lycoris, who had remained where she was, unmoved by his obvious unease, and towards a doorway at the back of the shop. Spearman drew aside the beaded curtain and extended a hand towards Lycoris, a beckoning gesture.

‘Do come through Miss Moir.’