Southampton: A City Lost… …and Found

Back to Eric Meadus. To accompany the exhibition at The First Gallery, Margery and Paul Clarke, who own and run the gallery, have put together a book of Meadus’s drawings. The book, titled Southampton: A City Lost…  …and Found, contains drawings made of various locations in Southampton with accompanying text about Meadus and his connection to those areas. There is also a rather good essay by local writer Philip Hoare about how the city has changed over the years particularly following the devastation of WWII.

Meadus experimented with different styles of drawing in the same way he did with painting. He seems to have settled finally on a quite stylised form of line drawing without tone or light and dark. These work very well and there are some good examples in the book, but those I like best are his location sketches. As records of places he visited to take back to the studio, these are a lot looser and freer and show just what a good artist he was. There’s a real vitality in these; the lines are quick and full of energy, the unfinished drawings showing all that he needed for reference at a later date. I can just imagine him standing on a street corner in his lunch hour, a race against time to get down the basics before returning to work to complete the day’s shift. These underpin all the work done later in the studio.

This is a really good book, one which I spent hours pouring over and to which I will come back again and again I think. Available to buy from The First Gallery and Southampton City Art Gallery. Well-worth a look.
Posted by www.joprice.co.uk at 18:57 1 comment: 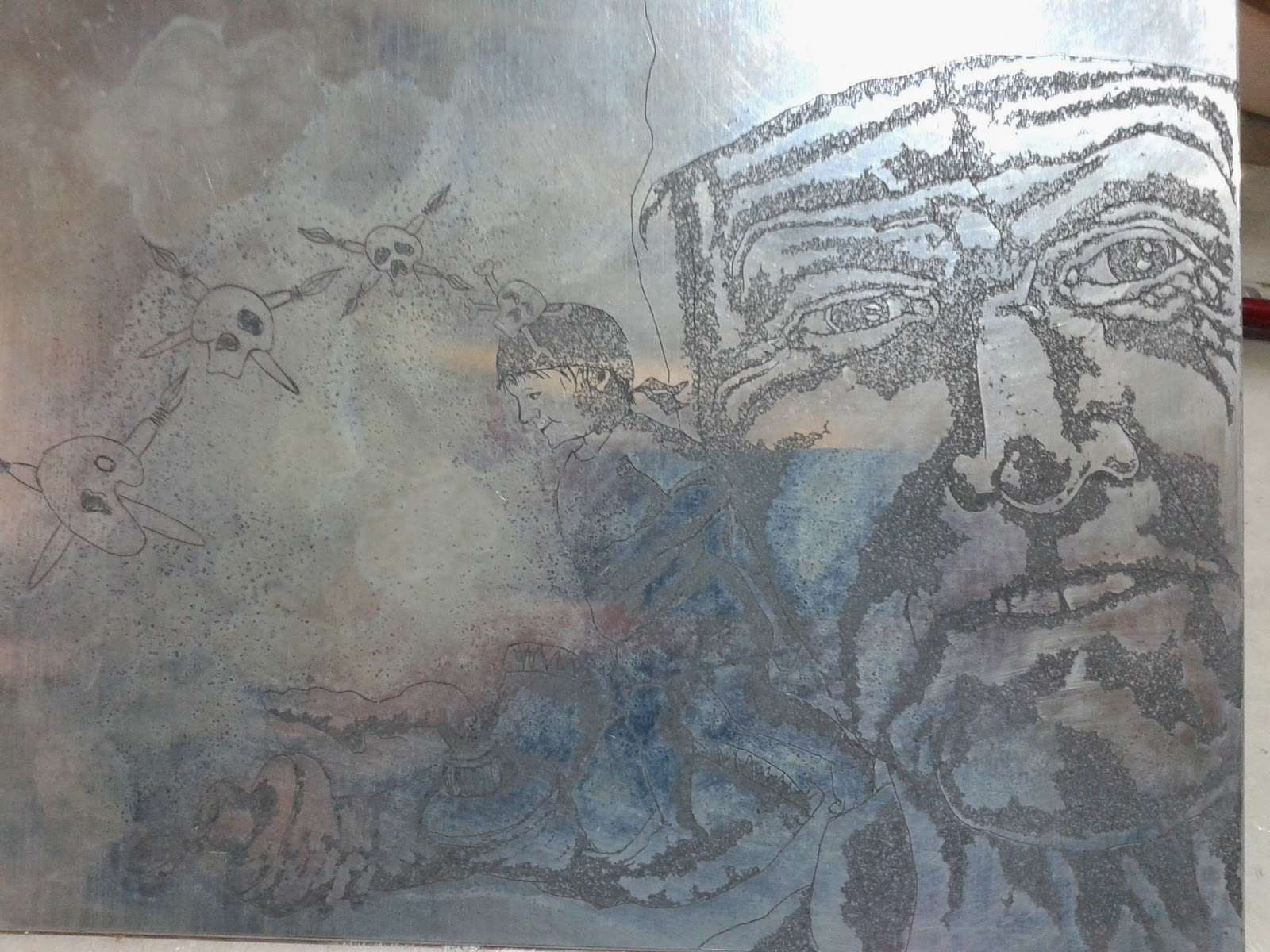 Managed to get the first acquatint done on PB4 this week; proof below. It looks a little dark but with successive etchings and some burnishing maybe, it'll work well I think. It's a good state. It won't be printed in black... sepia probably. Well, Pharaoh anyway. Still thinking about colour for the other elements. That won't come together until much later in the process. I'm pleased with it so far though. 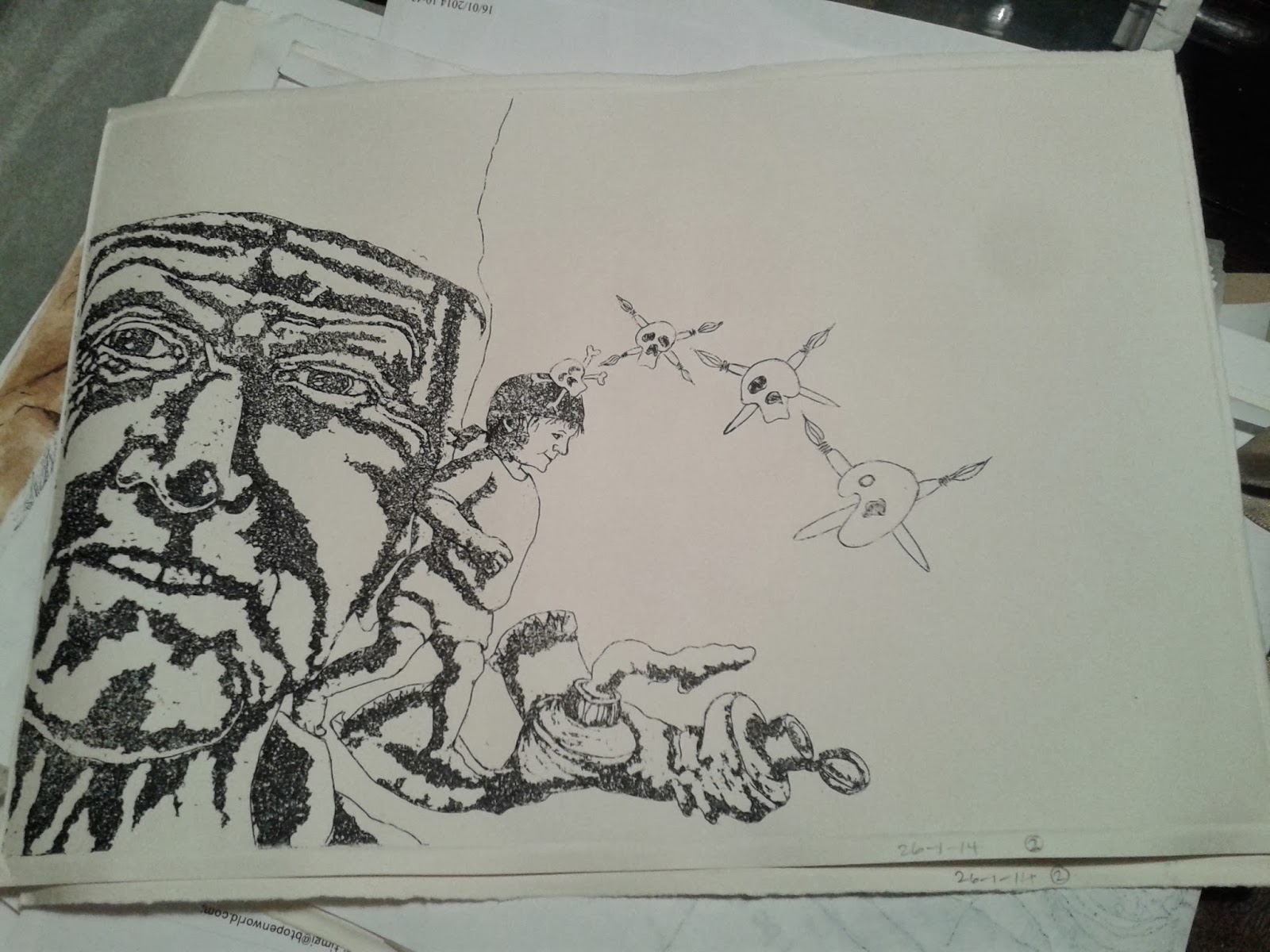 I've been feeling a bit demotivated with this etching the last few weeks. It's partly looking at all the Meadus paintings I think, got a hankering to paint. Silly excuse really. And I can't think of a subject to paint either - even sillier excuse.

Anyway, the first Cowprint meeting of the year is next week and I wanted to have something to show for the two months since we last met (other than the Chicken Murderer) so that spurred me on. There's nothing like a deadline to get you working, even if it's self-imposed.

Okay. Continuing from where I left off, Eric Meadus and composition. What do I want to say about this… I think it’s easy, at first glance, to conclude that Meadus’s work is rather naïve (guilty as charged, Sir) but again, the more of his paintings and drawings I look at, and the more familiar I become with them, I start to see that the compositions are really quite sophisticated. He was prepared to take chances too. Several of his paintings have large expanses of uncluttered sky or foreground such as Park with Houses (above). The placing of the buildings in a strip along the top third of the painting (Rule of Thirds; did Meadus know about this or was it intuition?) leaving the other two thirds as a great swathe of green shows his confidence. Many artists would have felt the need to fill the foreground, or at least have some detail to break it up. The subtle change of greens is all that’s needed to suggest perspective and a change in topography; the eye runs down the slope to the darker plateau assisted by the tree trunk drawing the gaze towards the lower part of the picture plane.

In Townscape, the buildings take up just the bottom half of the picture with an unrelenting greyish sky spreading across the other. The houses are cropped and stretched and crowded together in a gentle upward slope suggesting squeezed urbanisation below an oppressive winter sky.

Meadus plays with perspective; flattens out and warps the buildings. Walls almost seem to slide in front of each other to create architectural conundrums which work so well. Railway Station, possibly Woolston, Southampton is a good example. The end of the building, which should recede to the right looks like it has been peeled off the end of the building and pull out to lie parallel with the side. Somehow Meadus gets this to work – it doesn’t jar the eye at all.


There’s loads more I could say about this but this post feels like it’s turning into a critical essay so I shall stop here for today. I still want to say something about his drawings and about his creative drive so I will be back on this subject soon. In the meantime, go and see the exhibitions for yourself and see if you agree with me.
Posted by www.joprice.co.uk at 18:21 No comments:


There are two exhibitions on here in Southampton at the moment of work by the local artist Eric Meadus (1931 to 1970). I went to see them both on Thursday with my Meadus-fan cousin who was visiting for the day. It was a lot to take in; I’ve seen exhibitions of his work before but have never seen so many paintings in one go. My thoughts are still a little scattered about them so I’m hoping that in writing this post, I can sort them out a bit.


I’m really interested in the idea that Meadus was on the cusp of making it big (the exhibition at The First Gallery is titled Eric Meadus – Almost a Meteor) when he died at the horribly young age of 39. He was qualified in technical drawing but other than that, had no artistic training and his creative period was a short fifteen years. What he lacked in art education, he more than made up for in determination and motivation and managed to produce a phenomenal number of drawings and paintings in that time. One can see the experimentation, study and drive in his work and how it progressed and matured over the years; so much so that his first solo show in 1969 sold out. He had come to the attention of LS Lowry who championed him, and galleries in London and Paris were interested in his work. In 1971, the year after his death, one of his paintings was exhibited in the Royal Academy Summer Exhibition. There can be little doubt then, that this self-taught artist had something. How cruel that he should die when he did.


I guess at this point I should say that up until now, I’ve kind of overlooked his work, but the more I see, the more I can appreciate it. Seeing so many of his later paintings at once helped me to see that actually, he was really good with colour and composition. He wasn’t afraid of colour like so many artists can be (myself included!) and had confidence in its use, a real sense of what worked with what. His sister died not long before him; the colours in the paintings around that time change to become sombre and desolate in turn. Brooding, dark blue skies hang over a church in one water colour; searing mustard heavens against the deep red church of another. Off-white expanses above and in the foreground suggest a wintery desolation in a third – not the crisp, bright white of fresh snow, the sort of snow young children happily cavort in watched by their contented parents. These paintings suggest rumination and maybe a preoccupation with death… churches, gravestones; symbols present… They remind me somewhat of the emotion in Van Gogh’s last paintings and indeed, Meadus was a big fan (tragically ironic that he would be just two years older than his favourite artist when he died – are there other parallels…?).


I am going to stop there for the moment as it’s getting late (for me anyway – rock ‘n’ roll kid that I ain’t) and my brain is beginning to seize up. Composition, his drawings, his motivation and drive; these I want to ponder here, so more on Meadus soon.
Posted by www.joprice.co.uk at 22:48 No comments: 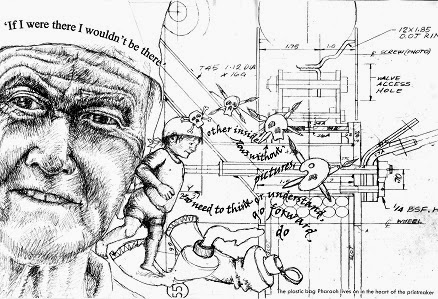 Decided to start the year with a PB print; this is number four in the series and will be quite different to the first three... solar plate added and colour. Playing around with colour schemes... not sure if I'll go with this but hey, need to make the plate first. 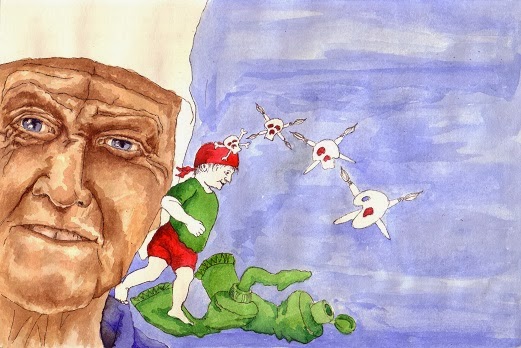 On a local artist by a local writer

Cutting-edge culture from the suburbs?  Yes, council estates and drain covers can be beautiful too, argues Philip Hoare as a new exhibition in Southampton demonstrates.