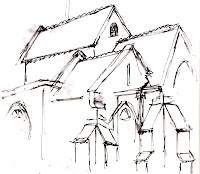 I’ve just returned from a peaceful week in the East Sussex village of Herstmonceux. There was much walking (and some falling down in the mud) through fields, countryside and surrounding villages; most refreshing.

My plan was to make a drawing every day. Easier said than done for someone who’s not really into landscapes or buildings. I did manage it but they ended up more as doodles of things I picked up along the way. 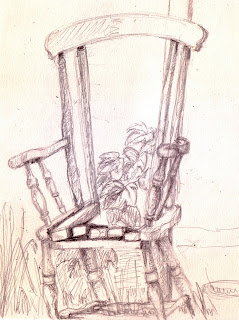 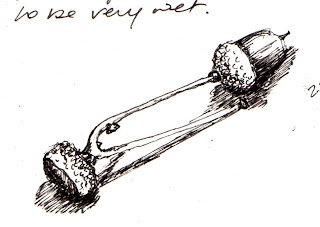 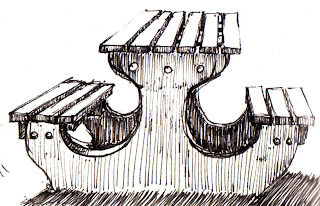 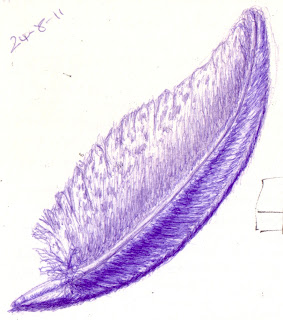 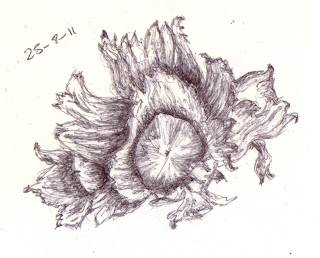 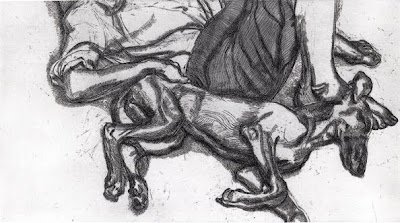 ‘Etching’s not drawing exactly, but it’s a sort of drawing.’
Lucian Freud

I’ve just realised that it’s three months since I last touched an etching plate – well, worked on one that is. Three months. THREE MONTHS! That’s a quarter of a year. Way too long. I’ve been drawing and painting a bit during that time, so not completely idle creativiely, but it’s definitely time to get back to my core business.

I’ve been thinking of making some etchings with just line work; working more quickly and energetically, straight on the plate without preliminary drawings. I think I became bogged down with the process of aquatinting and with working and working and working the plate… the last few images have taken three or four months each to complete. I need some quick-fix-instant-gratification etching – not that etching is ever quick-fix exactly.

As a prelude to this, never being one to rush into things, I’ve been looking at Lucian Freud’s etchings. Fantastic things; beautiful, skilful, intuitive, sensitive, atmospheric… most definitely inspiring. Here are some for your delight and edification. And if you want to investigate further, get Lucian Freud: The Painter’s Etchings. An excellent book. 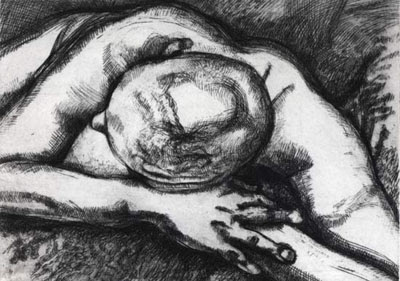 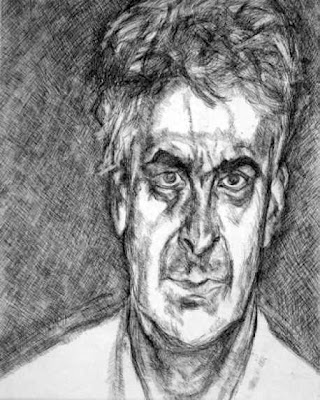 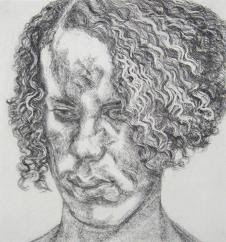 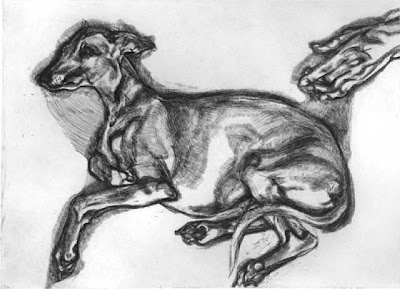 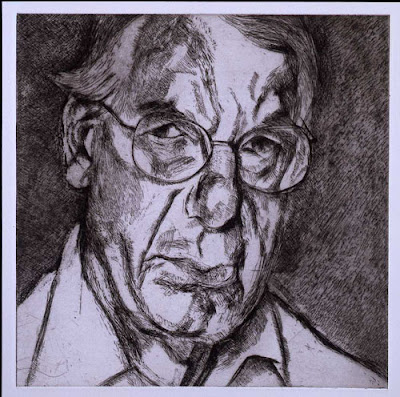 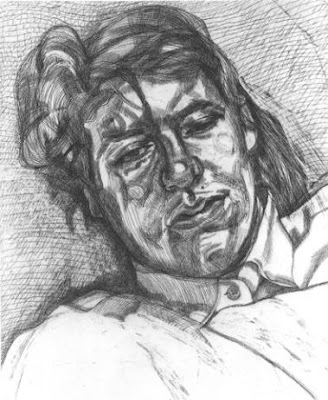 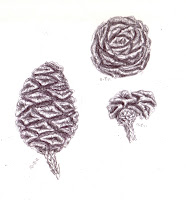 Here are some of this week’s doodles from my sketchbook. I picked up some rather satisfyingly shaped pine cones whilst vising the old military hospital cemetery at Netley. I love this place; it’s so peaceful and quiet. Perfect when one is feeling in need of solitude, which is ironic really considering it’s pretty crowded underground. They don’t say much though, the dead.

These drawings made me really scrutinise this little piece of the natural world; so intricate and well-made. Lead me to think about Uncle Henry and his passion for flora and fauna – and how understandable that is. All this natural stuff around us, even in a built up city… we so easily take it for granted. We don’t even see it half the time.

Seeds and gravestones. I could go all philosophical about the juxtaposition between beginnings and endings, birth and death. But I won’t. 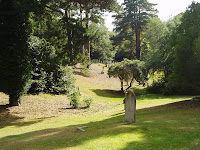 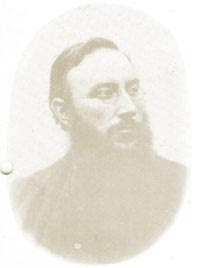 On Saturday I travelled down to Portsmouth Museum to see the Birds, Beasts and Bugs exhibition; a collection of over 10,000 items (apparently) belonging to Henry Leopold Foster Guermonprez, my great great uncle. These items include stuffed birds and animals, pickled fish and other sea creatures, case upon case of insects pinned in orderly ranks, plus many of his tools. Nets, microscope, jars, test tubes, his water colour set and many, many records and letters. Most of the specimens were collected by Henry himself in Sussex around the Bognor area but he also had a trail of people bringing dead creatures to his door and he occasionally bought more unusual specimens already preserved. He kept meticulous records of where, when and by whom each specimen was found and carefully labelled each with the information.

Henry was born in London in 1858. His father, Jean Henri Guermonprez, came over from Belgium in the 1850s and married an English woman, Charlotte Sarah Foster. The family moved from their home in Chelsea to Bognor in about 1892 and by 1897, Henry was married to the long-suffering Clara Sophia Phelps. I say long suffering because by all accounts, she – along with the rest of the family; Henry’s four children and his sister Harriet – was roped into Henry’s escapades with dead things. One of the display boards at the museum tells of how Clara stood on a chair holding a swan by its legs whilst it was skinned. Of course, there’s no evidence to suggest that Clara was an unwilling participant, even though she does look rather severe in the couple of photographs there are of her in the exhibition. Clearly Henry’s enthusiasm for flora and fauna was infectious; the children collected specimens for him and he had them and his sister making drawings and water colours of plants, fish, insects and birds – anything that (had once) lived. Henry carried out most of the taxidermy himself and mounted the stuffed birds and animals on pieces of cork float washed up on the beach from local fishing boats.

Henry and Clara had four children, Harry (my family connection on my father’s side), Jean, Walter and Stella. One can imagine them all tramping through the fields and along the shore always on the lookout for an interesting new something for Father. The exhibition displays many watercolours made by them and Henry, who was himself a proficient water colourist. Harry, the eldest son, my father’s uncle, went on to develop his own, quite different enthusiasm for amateur film making and co-founded the Bognor Regis Film Society (see my blog post of 9 May 2009).

Although trained as an architect, there is no evidence that Henry ever actually practiced. Legend has it that he stayed at home to look after his parents as the family was independently wealthy. Certainly these responsibilities didn’t stop him from having four children and spending much time on his interests. He did exercise his architectural training though in drawing up plans for an extension to Dalkeith (the family home) to house a small museum. These plans are on display at the exhibition. The extension was never built; however his home was open to anyone who wished to view his collection. There's a sweet letter from a schoolboy who wrote to express his thanks for having been shown around the collection by the master of the house. He dabbled in archaeology too and was involved in the discovery of the remains of a 13th century chapel at Manor Farm (Barton Manor), Nyetimber. He also had a hand in the discovery of a number of Bronze Age axes or palstaves in Bognor.

It all seems quite idyllic to me; an eternal summer. My overall impression of this distant relative, this typical Victorian collector, is that he was someone who was overflowing with a passion for natural history which he managed to communicate to those around him. I'd like to think that his family and friends benefited from his enthusiasm as much as those he invited into his home to see his collection, and indeed those who will enjoy it for years to come. 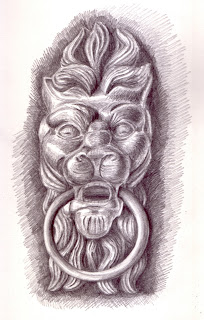 The kitchen fitters have done their work so I have my studio back now. The daily drawing slipped somewhat over the last couple of weeks (not that it was daily before that – more like every other daily…) so trying to get back on track now.

Continuing the theme of still life with narrative, this drawing is of part of an old standard lamp which my grandmother had in her sitting room. I remember the carved lion’s head with the brass ring through its mouth fascinated and spooked me when I was a kid – it is slightly sinister (and appealing to my inner goth). I’d like to know how old it is and where it came from; I have a vague recollection that someone said something about it being used as a prop in theatrical productions somewhere but sadly there’s no one left to ask now so I guess I’ll never know.

Apparently the motif of a lion’s head holding a ring in its mouth dates back to Roman times when it was a popular decoration on furniture, the ring often being used as a handle. It regained popularity in the early to mid-18th century and can still be seen today in the form of door knockers. In Roman times, the lion head mask was a symbol of strength, courage and majesty.

I made this drawing over the course of three balmy summer evenings this week, sitting with the doors of the studio wide open. Sweet. I find it very useful to look at the scanned image afterwards; it often appears quite different and highlights elements I hadn’t noticed before. And sometimes I have to resist the urge to tinker further with a finished image.