The Year of Solar Plate

Having reviewed Cowprint's year, it makes sense to look back at my own creative achievements during 2013.

Creatively, the year got off to a slow start as the chickens were keeping me busy with mycoplasmosis, eye operations and feather-plucking, as well as the usual round of mucking out ans feeding etc, so I didn't really get back to printmakung until March. We had dates in May for our first Cowprint exhibition, Imprint, so that spurred me on as I felt that as founder and chair of the group, I ought to produce a new image. Our first session of the year had been a New Year, Old Project session where we had dug out images on which we had got stuck and bounced new ideas around. This was particularly successful for me as got this image going again and finished.

There was a lot to organised for the exhibition and private view; advertising, the hanging, list of works, drinks, sales sheets, browsers etc. All good experience though and the exhibition looked great.

My next project was to make my edition of 25 prints for the 20:20 print exchange run by Hot Bed Press in Salford. I've not done this project before and it's been a while since I made such a large edition (I'm not a great fan of editioning), but actually, I really enjoyed the whole process. I only pulled a couple of duff prints which signalled to me that my printing skills are vastly improved since my last biggish edition. The spit bite element of this image worked quite well too; need to explore this further.


I've been feeling for some time now that my work needed to change direction; move on as it was feeling a little stagnant. I'd been thinking about adding extra elements, diagramatic elements and layering so in June, I did the solar plate weekend course at Red Hot Press as I thought this technique might help me speed up my processes. What a revelation! Solar plate gave me exactly what I needed in that I can use it in conjunction with etching and drypoint, printed intaglio and / or relief. The plates are quick to make and the quality of the detail is so good, I can use it to make images that would take me ages to etch and wouldn't give the effect I'm after. Here's the two-plate print I made on the course, one printed intaglio, the other relief.


After that, work began in earnest on the Cowprint calendar image, a panicked combination of solar plate and drypoint as I didn't think I had time for an etching. As it happens, it worked out really well. Thank the gods of printmaking for solar plate!


The organising and marketing of the calendar kept me pretty busy throughout the summer
and Autumn; it was a new experience for me working on this sort of commercial venture.

During the Summer I had work in three shows; Double Exposure and Spellbound both at Wool House, and the Red Hot Press Summer show during Open Studios. I did some volunteering at Wool House during August which was great - historically interesting and I met some lovely people.

September was all about the calendar but I also managed to squeeze in a quick 3D project - some drypoint on a plastic piggy bank for the charity fundraiser Go Pig! It was a bit last minute so didn;t work out as well as hoped... I'd quite like to try something similar again though in the interests of getting my prints 'out of the frame' so to speak. More thought needed about this.

In November my December print hung alongside my fellow Cowprinters' calendar prints at Red Hot Press for Printer Wonderland; it was sell, sell, sell those calendars! The d.@rt Centre Christmas Fayre at the beginning of December was another first for me. Again, lots to organise but good experience.

In between all the calendar and pre-Christmas hustle and bustle, I still managed to find time to work on my last print of the year, The Chicken Murderer. In this print I was able to combine etching with solar plate for the first time in a two plate print - most satisfying. I've been using more colour this year too... not consciously, it's just the way the work has gone. This too is a good thing.

So, 2013 was a very productive year full of new ventures and exciting developments and I am very happy with the way my work is travelling. Time now to think about planning for 2014.

A year in Cowprint 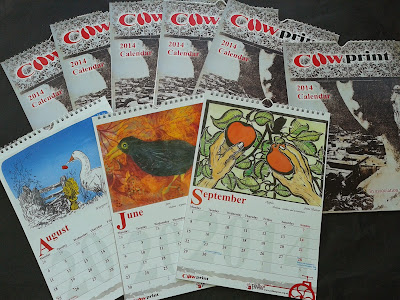 It’s inevitable, I suppose, that at this time of year, one is drawn to reflect on the year coming to a close. That post-Christmas / pre-New Year week, where everything is so out of the usual routine, is an ideal time to review the events of the previous year and plan for the next.

Cowprint isn’t yet two (we celebrate the group’s second birthday in February) but 2013 has been a great year. We had our first exhibition, Imprint, at the d.@rt Centre in May and high on its success, embarked straightaway on producing the Cowprint 2014 calendar. Lovely prints together with Irene’s stylish layout produced a really professional and marketable object which has sold really well (still a few left if anyone wants one!). It also forced us to choose a name for the group, something we’d been finding somewhat difficult (Cowprint comes from Cattle Market by the way, the building which is now home to Red Hot Press). 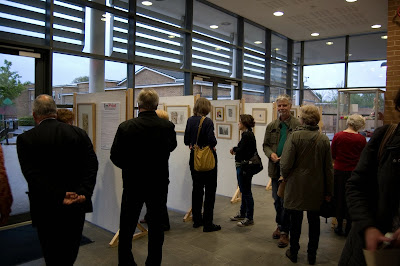 At the end of November, Red Hot Press held its annual Christmas event, Printer Wonderland. We were able to display the original calendar prints together and of course, the calendars were on sale along with the prints, framed and unframed. And just a week later, the group had its own stall at the d.@rt Centre Christmas Fayre selling prints, calendars, cards, handmade books, gift tags, paper lanterns and Christmas decorations. We were able to spread to two tables which were crammed with an abundance of lovely papery things. 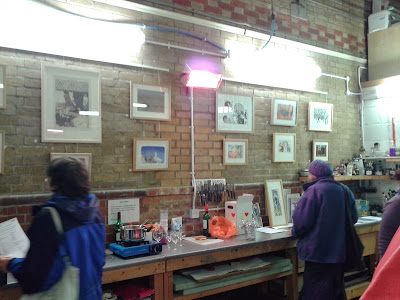 So, Cowprint, which started as a group of artists meeting to share their work and ideas, has evolved this year. Of course, sharing our work is still at the heart of what we do, but now, we have the added motivation of group projects and small commercial ventures. Our next collaboration and first of 2014 is already decided so here’s hoping it will be as enjoyable and successful a year as 2013. 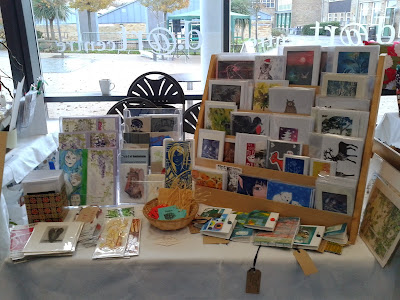 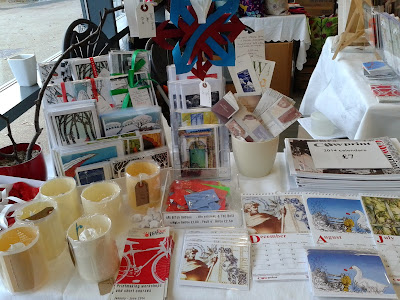 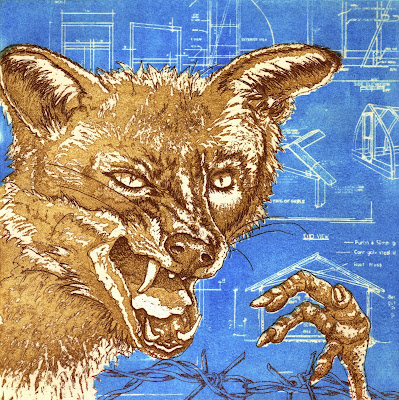 What do the Christmas holidays mean to me? More studio time! The Chicken Murderer is finished (although I need to take some good prints on good paper). I decided it needed something to link the fox and the chicken foot, hence the barbed wire. I also felt a lighter background would work better.

So, here he is in all his bitey ferociousness. Next project already under way...
Posted by www.joprice.co.uk at 10:29 No comments:

The First Cut - paper at the cutting edge 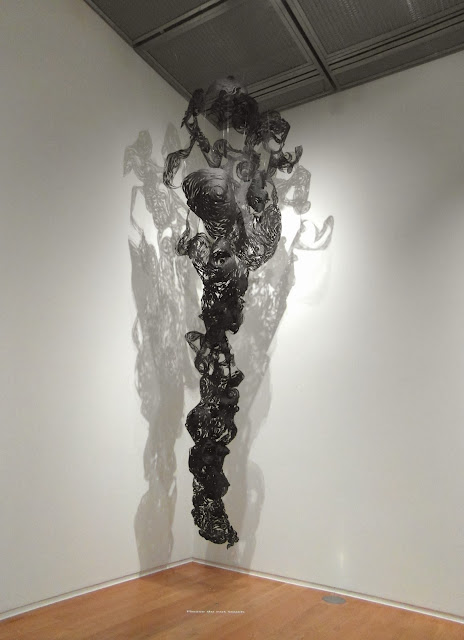 The First Cut is a must-see for printmakers, paper cutters and any artist who uses paper as their base medium. A touring exhibition curated by Manchester Art Gallery, it includes paper cuts and sculptures by Andy Singleton, paper cuts by Rob Ryan, sculptures by Susan Stockwell, Justine Smith, Claire Brewster and Andreas Kocks amongst others, plus a wonderful animation, Going West by Anderson M Studio. These are just a few of the 30 artists who work with paper in unique and inspiring ways to transform it into amazing and beautiful works of art, minute to enormous, displayed in the gallery at the SeaCity Museum here in Southampton. 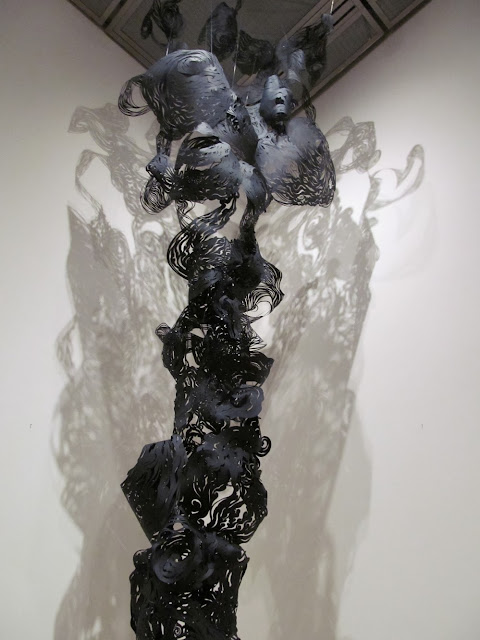 I think the piece that really blew me away was Andy Singleton's Stellar Spire in the Eagle Nebula, a great, towering black plume of swirling paper suspended from the ceiling, casting the most wonderful shadows on the wall behind. Fabulous.

This exhibition is a real treat for those of us who work with paper; we're not likely to see a show as diverse and comprehensive as this for some time I would imagine, so go see it before it closes on 12 January. 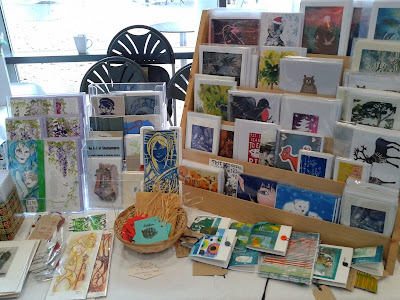 Last Saturday, we spent the day touting our wares at the d.@rtCentre Christmas Fayre. This is the first time Cowprint has had a presence at an event like this so it was an exciting new experience. We had a wide range of handmade, paper-based items for sale; prints, cards, lanterns, notebooks, Christmas decorations, bookmarks, gift tags... Fortunately (for us anyway), the person who was supposed to occupy the table next to ours didn’t turn up so we were able to expand and create a really lovely display (mostly thanks to Irene).
There were plenty of people browsing but not so many waving cash at us so takings weren’t great, a sign of the times perhaps. Of the sales we did make, cards seemed to be the most popular. It was a jolly atmosphere though with the other stalls offering jewellery, textiles, cakes etc. There were also children’s activities, a raffle and a choir, just like the fayres I remember as a child, so although we didn't make a great deal of money, I think we all had an enjoyable day. 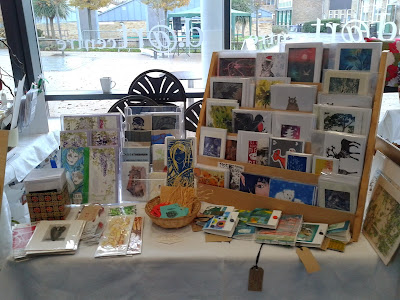 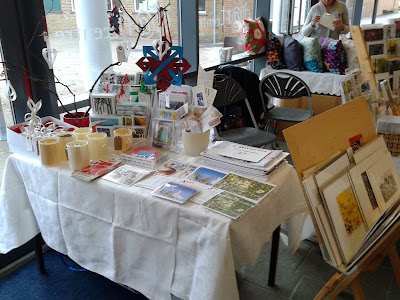 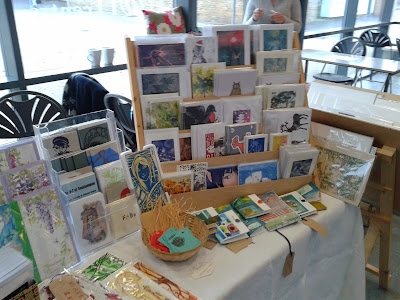 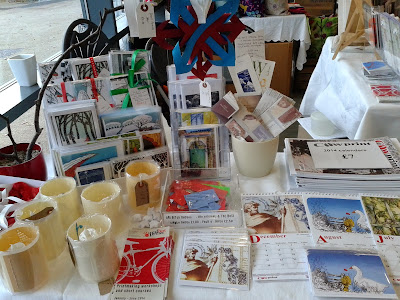 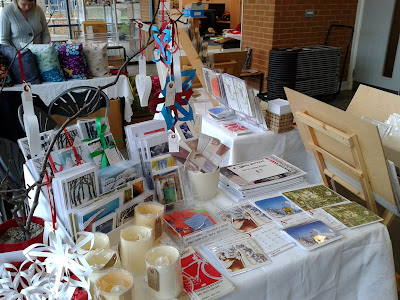 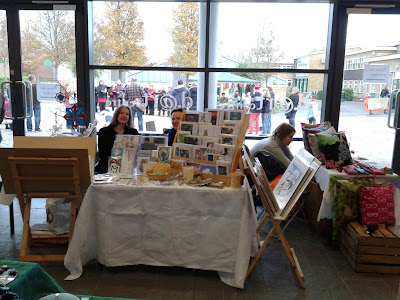 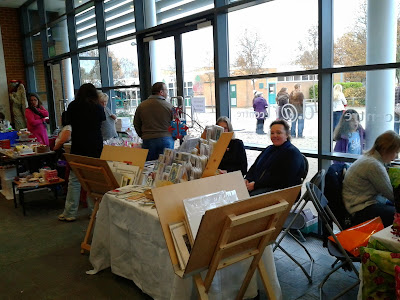 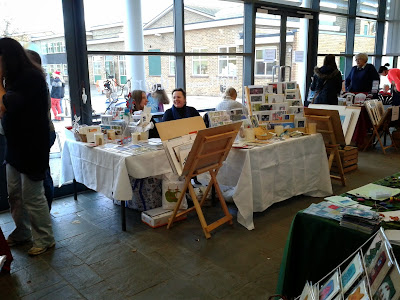 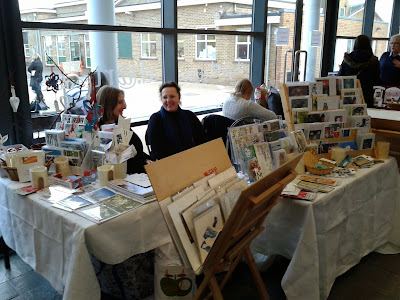