The Arnolfini in Bristol

I went to Bristol yesterday to see a friend and took the opportunity to visit the Arnolfini, the city’s contemporary art gallery. Bit of a nostalgia trip too – used to visit the gallery regularly when I was at art school just across the bridge in Wales.

There are two exhibitions on in celebration of the Arnolfini's 50th anniversary. The first is Museum Show Part 2 which was a collection of ‘museums’ with titles such as the Museum on Non-Participation, the Museum of Television and the Museum of Forgotten History. This is the second part of a sort of survey of museums created by forty artists from around the world and consists of installations including a wide range of objects. The above image is the one I found most pleasing.

The second exhibition is Self-Portrait: Arnolfini by Neil Cummings; a series of water droplet-shaped patches with text on them arrange throughout the foyer and up the stairs of the gallery. The text gives various facts about the history of Bristol and the gallery starting from the Bristol Riots of 1831 through to 2061, 100 years after the gallery opened, as well as details of world organisations and advances in technology. The shapes are colour-coded: pale blue for the history of the Arnolfini and art in general, olive green for social and financial organisation and purple for technological innovation. The whole forms an elaborate timeline based on fact and flowing off into speculation - which actually drew me in more than I thought it would. Where the text which is purely speculative is laid out in exactly the same way as that which is historical fact, it's very easy to be sucked in to believing all is truth.

The Museum of Museums left me cold I’m afraid, as it seems most conceptual art does these days. I’ve been thinking about why this might be, having had a keen interest in it in the past. I can only assume that it’s because that brand of art is so far removed from my current situation, irrelevant to my life as it is now. I guess I just don’t have the time or mental energy to ponder these things anymore. Give me a painting by Vermeer or a Paula Rego etching any day - not that these aren’t thought-provoking of course; they most certainly are. They give me something conceptual art doesn’t though. 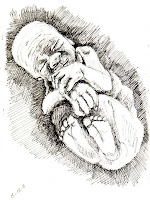 Over the last few months I’ve been thinking on and off about beginnings and endings, birth and death, and how development is affected by external factors. I was weaving this into an etched self-portrait but as my etching mojo seems to have taken what I hope is just a temporary leave of absence, I need to rethink and carry this work in a new direction and in a new medium.

Foetuses are a rather obvious place to start as an emblem of new beginnings, but start there I shall. The drawing above is in the process of being transferred to a wood engraving block and will, I think, be surrounded by some text.

And here he is, tidied up. Just took out some of the odd bits that I missed before proofing. Amazing what a difference that makes, although obviously, still pretty rough. I'd be embarrassed to show it to a real wood engraver. It was fun to do though.
Posted by www.joprice.co.uk at 10:56 2 comments:

Took the first proof off my block yesterday and here it is; pretty rough around the edges but not as bad as I thought it would be... although possibly looks more like a wood cut than a wood engraving. Needs some tidying up. Oh and I need to order some relief ink as my tin had completely dried up (had to print it using etching ink) – shows how long it’s been since I last did any wood engraving! 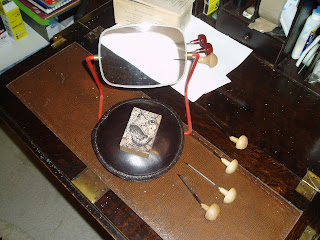 It seems I've found the solution to the problem of not being able to see what I'm doing on my wood block. Forget the new glasses; look what I found lying around in the studio (inherited from my father who was always making something and was very long sighted). This magnifying lens on a stand is the perfect size and shape – my sandbag fits exactly underneath. Working on the block this afternoon has been much easier. Well, from the point of seeing what I’m doing that is.

The image is very slowly taking shape – hope to be able to take a proof soon. My main problem is bruising the edges of the cuts with the bottom of the tool. I need to take some advice from Someone Who Knows about this and what I can do to stop it. I’m a bit embarrassed to show the block to a real wood engraver though as it’s so rough and badly done. Ah well, I’m not planning to use it for anything – it’s just for practice.