On portraits and plumbing 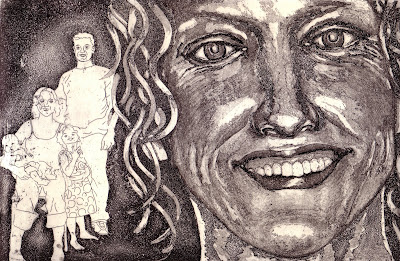 We are in chaos again. This seems to be a regular state of affairs these days as the house works continue. Having had the rotten floor joists replaced, we are now on the way to having a completely new kitchen installed. Or so I thought. What a lengthy, time-consuming faff it all is; meetings with the designer, surveys, more meetings with the designer, trips to the store to look at flooring, tiles and appliances, even more meetings with the designer... At some point, they will put my order through, then I will have to wait an interminable length of time for the installation. The tedium. Don't know what I expected really - having a new kitchen is a fairly involved (and expensive!) business.

In the meantime, those lovely kitchen people have given me a couple of tasks to keep me busy whilst I wait. They announced that they won't build a cupboard around the hot water tank as it is (as originally agreed) because they don't consider it safe (suspended four feet off the ground on two iron poles which fitted into the wall on one side and two pieces of 2 by 1 on the other). Fair dos; if the whole lot comes down in an unplanned way, it wouldn't be pretty. So, we're having the tank moved to the floor. Five days' work for the plumber (during which time we have no hot water or heating) and much mess and expense; particularly irritating as the new tank was put in less than two years ago. Yes, I KNOW I should have had a combination boiler.

Anyway, there is a point to me telling you all this - it's not just a whinge. The upside is I've had a couple of good days in the studio whilst the work is being done. I was planning to work at home (busy time of year in Children's Social Care data) but, well, the pull of the studio was just too strong. Etching or data analysis...? Etching or data analysis...? No contest really.

I recently completed the first in a new series of images in which I'm trying to combine narrative with portraiture. All portraits have an element of narrative to some degree; everyone has their story. I think it would be hard for the viewer not to pick something of this up from the portrait if the artist has done his/her job - whether it's the subject's true story is a different matter of course.

The above image, Sister Mary, Mother of H and M, evolved into something I hadn't foreseen really and became about family. I'm not entirely sure what it's saying though... they look kind of ghostly to me, ephemeral. I wanted to have them in a formal pose reminiscent of a Victorian photograph but M wasn't up for that particularly, so added two fingers and a poking-out tongue. A nice touch I feel. Of course, anyone who knows H and M will spot immediately that I've used a drawing which is nearly four years old. Knew it would come in handy some time.
Posted by www.joprice.co.uk at 13:01 4 comments: