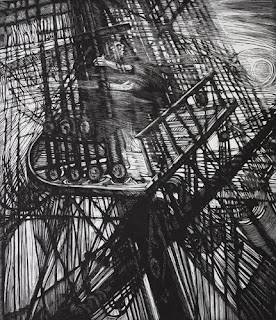 2011 got off to a slow start for me due to two bouts of illness and a variety of domestic disasters involving broken cars, rotten kitchen floor joists and cracked toilet cisterns. Creatively, January was pretty much a bust.

February however began much more promisingly with a visit to Pallant House Gallery in Chichester to see an exhibition of wood engravings by Garrick Palmer. I first came across his work about five years ago when I was working on a series of card cuts based on Bartleby the Scrivener by Herman Melville. I found a copy of the Folio Society’s publication of the same from 1967 (Three Stories, Herman Melville) on ebay, illustrated by Palmer. Naturally I had to buy it, being very careful not to look at it until I had all my images established. I didn’t want to be influenced even subconsciously by another artist’s images of the story.

Garrick Palmer was born in Portsmouth in 1933 and studied Fine Art at Portsmouth College of Art and Design where he first learnt wood engraving, and at the Royal Academy Schools in London. He taught at Winchester School of Art from 1962 to 1986 where he was Head of the Foundation Department. This last is particularly interesting to me as I studied in that same department from 1987 to 1988 so missed him by a whisker; how annoying. whole career and includes many images of the English landscape, something he returns to time and time again and clearly loves. These are autobiographical to some extent, marking significant points in his life; his wife’s battle with cancer for instance, and when he himself was diagnosed with diabetes.

It was Palmer’s book illustrations I was drawn too though, particularly the nautically themed ones. His illustrations for Moby-Dick are breathtaking in complexity, composition and atmosphere, as are those for The Rime of the Ancient Mariner (the latter took ten years to complete). I found it hard to tear myself away from these. And although not my favourite of Palmer’s images, I was pleased to see an original copy of Bartleby himself. I love Melville’s story of the Wall Street Scrivener.

Not being a wood engaver myself, I don’t feel qualified to comment on his technique; I do know however, that he’s a master of it and if you’re at all interested in wood engraving, go and see this show before it finishes on 13 March.